The Dayton Literary Peace Prize, inaugurated in 2006, is the first and only annual U.S. literary award recognizing the power of the written word to promote peace. The Dayton Literary Peace Prize invites nominations in adult fiction and nonfiction books published within the past year that have led readers to a better understanding of other cultures, peoples, religions, and political points of view. Both awards carry a $10,000 cash prize. 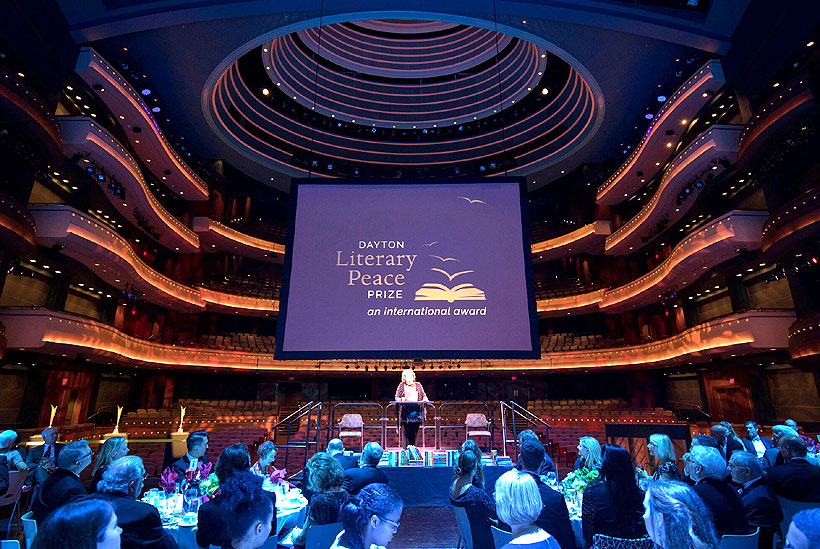 The Mission of the Dayton Literary Peace Prize

The Dayton Literary Peace Prize mission is To advance peace through literature.

The Dayton Literary Peace Prize goal is to Support those who write, publish, read, and share literature that advances peace.

In 1995 Dayton was chosen as the site of what came to be known as the Dayton Peace Accords. The accords were a last-ditch effort to stop the ethnic cleansing that had claimed more than 300,000 lives and displaced 1 million people. It was “the worst killing ground in Europe since World War II,” wrote Mr. Richard Holbrooke in his 1998 book, To End a War.

Ambassador Holbrooke chose Dayton as the summit site, an unimpressive alternative to opulent settings in Geneva, Paris, or Washington. Wright-Patterson Air Force Base, the largest in the country, provided stark accommodations for the nine participating delegations, sealed off the press, and displayed America’s air power. This environment augmented Holbrook’s use of the “Big Bang” strategy—now known in diplomacy circles as a “Dayton”—where negotiators are locked in a room until they reach an agreement.

Daytonians welcomed the negotiators and then formed human peace chains around the base, holding candlelight vigils throughout the 21 days of talks. Dayton City Commissioner Matt Joseph described Dayton’s response, “People reacted. There was a fire in Bosnia and it was brought to our neighborhood. We took our garden hoses and tried to put it out. We just acted like neighbors. That’s what we do in Dayton. If they’re in trouble, we’re in trouble.”

(For a greater understanding of the Dayton peace process, please watch the video below and read these two articles by Kati Marton, Holbrooke’s wife, published in the New York Times on April 18 & 19, 2011: “Waging Peace With Justice“ and “The Weapons of Diplomacy, and the Human Factor“.)

What happened between Dayton and Bosnia after the accords were reached is especially noteworthy. In looking for ways to keep the “spirit of Dayton” alive, community members established citizen-to-citizen relationships with Bosnians through cultural and educational exchanges, trade missions, and international conferences between policymakers and government officials. Dayton also arranged a sister-city agreement with Sarajevo and hosted a “Concert for Peace” with the Sarajevo and Dayton Philharmonic Orchestras.

“We are 5,000 miles away and made a difference for people no one every heard of, and in a place almost no one knew was there,” says Commissioner Joseph. “We were chosen, and we took up the cause.” Community leaders created the Dayton Peace Prize in 1999 to recognize individuals who contributed to the peaceful reconstruction of a society torn apart by war. Archbishop Desmond Tutu (1999), William Jefferson Clinton (2000), George Soros (2002) and Richard Holbrooke (2005) were recipients.

The Dayton Literary Peace Prize Foundation is the successor to the Dayton Peace Prize. The DLPP is dedicated to celebrating the power of the written word to forge peace. Daytonians witnessed that words not guns stopped a war. An all-volunteer committee researched the award, discovering that only two other peace prizes existed in the world and no literary peace prize existed in the U.S. DLPP established the only international literary peace prize in the country. The DLPP annually presents awards in Distinguished Achievement, Fiction and Nonfiction, each winner receiving a $10,000 honorarium and the runners-up in Fiction and Nonfiction receiving $5,000.

Publishers and writers immediately responded to the call for nominations. DLPP established a cadre of first readers and final judges, brought together universities in support of the awards, appealed to corporations, businesses, local government and individuals in the Dayton area to launch the first award ceremony. The DLPP board asked award-winning local sculptor Michael Bashaw to create an award. Bashaw created a brass sculpture that evokes paper and quill and is inscribed with the author’s name and book title and the word “peace” in over 200 languages.

The announcement of the first prize was picked up by 244 newspapers throughout the U.S., Canada, Europe, Asia, Africa, the Middle East and Australia. The DLPP has continued to enjoy media attention during its fourteen-year history. Some of the coverage is available on the website www.daytonliterarypeaceprize.org under Press Room.

The DLPP University Consortium and Library Consortium have significant outreach programs. Each year, the University Consortium, made up of colleges and universities in Ohio and beyond (we have university connections in Michigan, Virginia, New York, Utah, Pennsylvania, California and the U.K. and are working to extend the university connections through universities with peace institutes throughout the U.S. and beyond) presents DLPP programming for their students and the public.

The Dayton Literary Peace Prize Foundation remains primarily a volunteer organization, is non-profit and depends upon donations from individuals, corporations, universities, local government and grants to sustain its efforts.

The History of the Holbrooke Award

The Ambassador Richard C. Holbrooke Distinguished Achievement Award was formerly the Lifetime Achievement Award. Upon the untimely and tragic death of Richard Holbrooke, the board of the Dayton Literary Peace Prize (DLPP) Foundation determined that renaming the DLPP Lifetime Award for Ambassador Holbrooke was a fitting tribute to the man who made Dayton synonymous with peace around the globe (see “History of the Dayton Literary Peace Prize“).

When Ambassador Holbrooke received the Dayton Peace Prize, the forerunner of the Dayton Literary Peace Prize, he advised us to pay annual tribute to the peace process and not let the world forget that peace can be forged with words. The award has been renamed the Dayton Literary Peace Prize Richard C. Holbrooke Distinguished Achievement Award and will adhere to the same criteria as the DLPP Lifetime Award. The award has previously honored Studs Terkel (2006), Elie Wiesel (2007), Taylor Branch (2008), Nicholas Kristof and Sheryl WuDun (2009), and Geraldine Brooks (2010). After Ambassador Holbrooke’s death, Barbara Kingsolver became the first winner of the Richard C. Holbrooke Distinguished Achievement Award in 2011, followed by Tim O’Brien(2012), Wendell Berry (2013), Louise Erdrich (2014, Gloria Steinem (2015), Marilynne Robinson (2016), Colm Tóibín (2017), John Irving (2018), and N. Scott Momaday (2019).

The prize includes a Michael Bashaw sculpture and the monetary award of $10,000.

We invite you to follow these links to learn more about Richard Holbrooke. Holbrooke’s wife, Kati Marton, wrote two articles for the New York Times in a series called “Remembering Richard Holbrooke, Parts 1 and 2.”

Here is a review of The Unquiet American: Richard Holbrooke in the World by Derek Chollet & Samantha Power. The review was written by Michael Getler for the Washington Post and published on November 11, 2011. 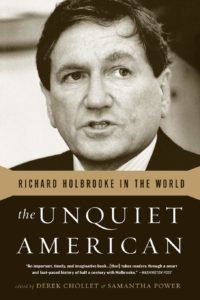 The Dayton Literary Peace Prize Foundation was honored that in 20019 The Dayton Literary Peace Prize was the recipient of the  prestigious Irma Lazarus Award, considered to be the highest of the Ohio Governor’s Awards for the Arts. The Irma Lazarus Award goes to “individuals or organizations who have helped shape public support for the arts through their work as advocates and have brought national and international recognition to Ohio through sustained dedication to artistic excellence.

2021 Ariana Neumann, When Time Stopped
2020 Chanel Miller, Know My Name
2019 Eli Saslow, Rising Out of Hatred: The Awakening of a Former White Nationalist
2018 Ta-Nehisi Coates, We Were Eight Years in Power: An American Tragedy
2017 David Wood, What Have We Done: The Moral Injury of Our Longest Wars
2016 Susan Southard, Nagasaki: Life After Nuclear War
2015 Bryan Stevenson, Just Mercy: A Story of Justice and Redemption
2014 Karima Bennoune, Your Fatwah Does Not Apply Here: Untold Stories from the Fight Against Muslim Fundamentalism
2013 Andrew Solomon, Far from the Tree: Parents, Children, and the Search for Identity
2012 Adam Hochschild, To End All Wars: A Story of Loyalty and Rebellion, 1914-1918
2011 Wilbert Rideau, In the Place of Justice: A Story of Punishment and Deliverance
2010 Dave Eggers, Zeitoun
2009 E. Benjamin Skinner, A Crime So Monstrous: Face-to-Face with Modern-Day Slavery
2008 Edwidge Danticat, Brother, I’m Dying
2007 Mark Kurlansky, Nonviolence: Twenty-five Lessons from the History of a Dangerous Idea
2006 Stephen Walker, Shockwave: Countdown to Hiroshima

2021 Jordan Ritter Conn, The Road From Raqqa
2020 Jennifer Eberhardt, Biased
2019 Wil Haygood, Tigerland: 1968-1969: A City Divided, a Nation Torn Apart, and a Magical Season of Healing
2018 Michelle Kuo, Reading with Patrick: A Teacher, a Student, and a Life-Changing Friendship
2017 Ben Rawlence, City of Thorns, Nine Lives in the World’s Largest Refugee Camp
2016 Jessica Posner and Kennedy Odede, Find Me Unafraid: Love, Loss and Hope in an African Slum
2015 Jeff Hobbs, The Short and Tragic Life of Robert Peace:  A Brilliant Young Man Who Left Newark for the Ivy League
2014 Jo Roberts, Contested Land, Contested Memory: Israel’s Jews and Arabs and the Ghosts of Catastrophe
2013 Gilbert King, Devil in the Grove: Thurgood Marshall, the Groveland Boys, and the Dawn of a New America
2012 Annia Ciezadlo, Day of Honey: A Memoir of Food, Love, and War
2011 Isabel Wilkerson, The Warmth of Other Suns: The Epic Story of America’s Great Migration
2010 Justine Hardy, In the Valley of Mist: One Family in a Changing World
2009 Thomas Friedman, Hot, Flat and Crowded: Why We Need a Green Revolution—And How It Can Renew America
2008 Cullen Murphy, Are We Rome? The Fall of an Empire and the Fate of America
2007 David Relin and Greg Mortenson, Three Cups of Tea: One Man’s Mission to Promote Peace … One School at a Time
2006 Adam Hochschild, Bury the Chains: Prophets and Rebels in the Fight to Free an Empire’s Slaves 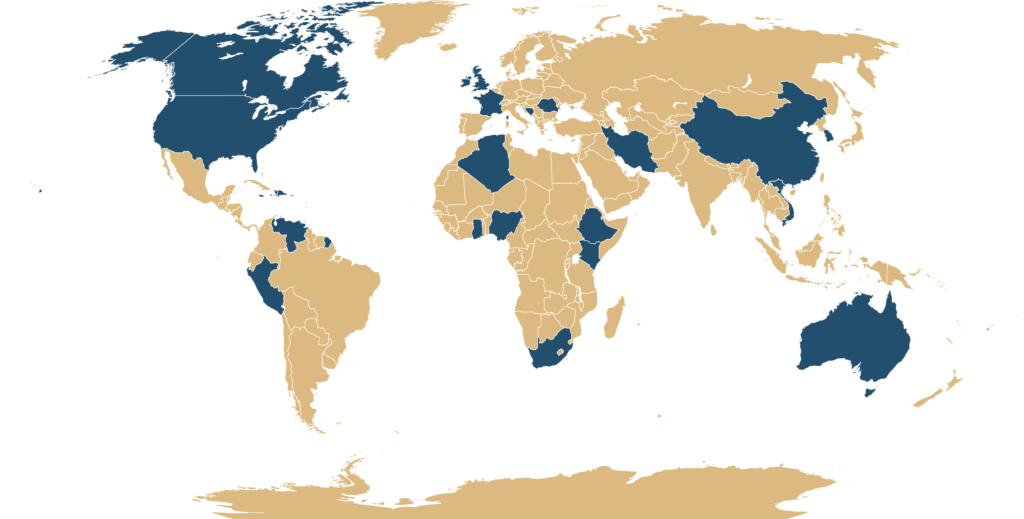 Settings for Our Award-winning Books 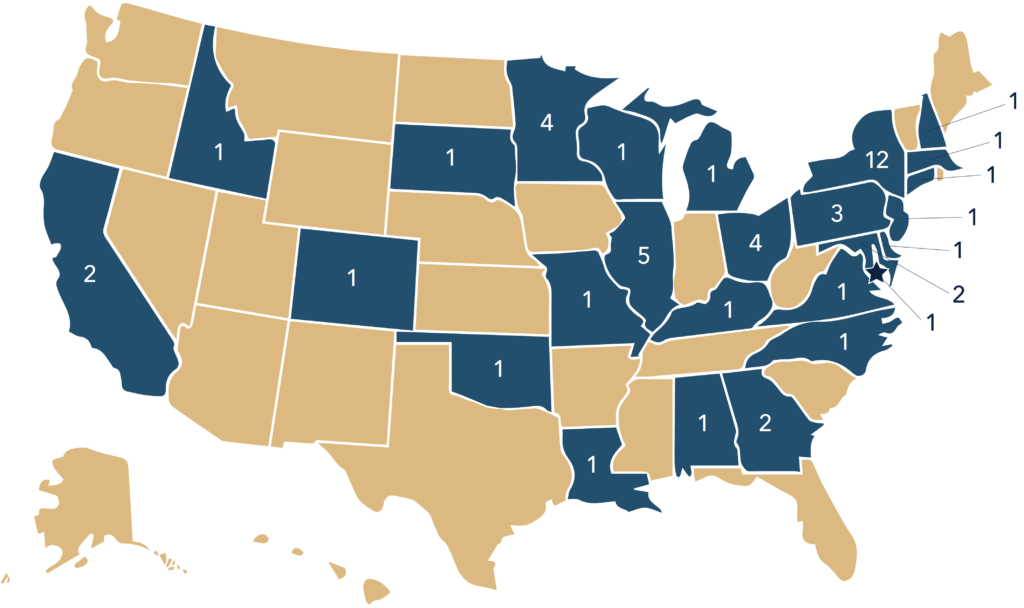 Social Media Followers Around the World

As of November 23, 2021, the Dayton Literary Peace Prize has tracked thousands of social media followers around the world, in 45 different countries. 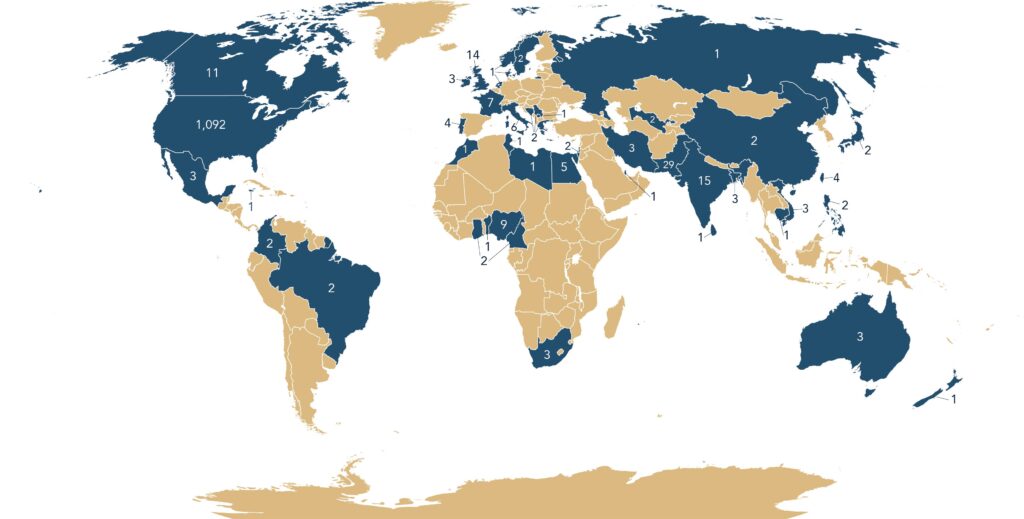 Please Join us in Thanking Our Sponsors in Peace

Sean and Leslee Creighton and the New Americans Colleges and Universities

* Publishing Houses submitting entries for the first time in 2022.

International Publishing Houses Nominated as of 2022