The American Dream: Whose Myth? Whose Reality? 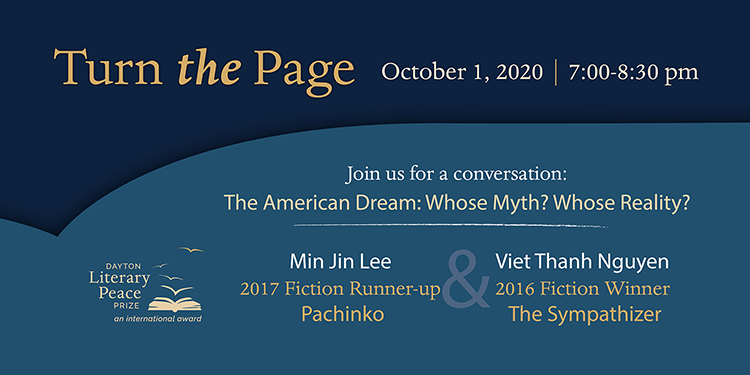 Min Jin Lee and Viet Thanh Nguyen come together with Gilbert King, author of Devil in the Grove to discuss crucial topics surrounding the American Dream in the year 2020. Lee and Nguyen—both identifying as children of Asian refugees—use their novels to create dialogue around this past year’s events. As both authors tap into the complex questions posed by King, they respond through the eyes of their characters as well as their communities.

Lee, author of Pachinko is the 2018 Runner up in the category of Fiction. It is through Lee’s personal reflection of her father’s immigration story that we hear about the effects of war on immigrant families. She states that growing up with a parent who had experienced such trauma was like being around a “person ready for flight.” By living in such an environment, it became clear how quickly trauma can inform the rest of one’s life. While listening to Lee, I too reflected on difficult moments throughout my own childhood that I have only began to unpack in the last year. Lee’s retelling of her father’s story brings her to a reckoning conclusion, being that trauma can reshape how connected we are to the places we call home. She does not deny that her life has become informed by the trauma experienced by her parents, rather she explores this truth and recognizes its presences within the immigrant community—specifically that of Asian immigrants.

Viet Nguyen, the 2016 Fiction winner for his book The Sympathizer felt similarly in regards to this topic. As a child of Asian refugees, Nguyen says that these secondhand memories and traumatic experiences become intimate even if they were not experienced firsthand. It is the idea of empathizing with such pain, through the telling of stories. Ultimately, the result is long term plans of evacuation. Lee also attests to such plans as she reflected on the events of  September 11th, 2001.

As an onlooker, standing outside of this community, it was of interest to me how similar minority experiences can be. Whether it be the effects of gun violence, substance abuse, or a dysfunctional family, the outcomes in many ways are identical. This experienced trauma informs one’s thinking, and consequently the lives such individuals build for themselves.

As the conversation continues, both authors take turns reassessing the American Dream by tapping into the American thought process—with their own stories and experiences in mind. The idea of resistance was almost immediate. Because much of America’s history has placed itself in the position of a caretaker, it becomes even more realistic for its citizens to believe they are immune or even protected for the natural occurring disasters of this world. However, it is when the authors insert themselves and others back into the picture that we—as readers—are reminded that, hurt and devastation is impartial. As we think about our own investments within the American Dream, it becomes important that we also reincorporate the world around us and all of it’s unexpected encounters.

As an American, my nationality is hardly ever questioned on paper. However, it is when I step into the full embodiment of my ethnicity and gender that I am then grouped and labeled with many “others.” Both Lee and Nguyen speak about what it means to write from the standpoint of a minority; and how they are in constant pursuit to be seen as writers apart from their ethnic and racial backgrounds. Although they both write from the perspective of Asian Americans, that is not all that they are. Both authors expressed the want of interacting with their audience without having to explain mundane occurrences. Lee describes this desire as the act of resisting “otherness” even if the world says different. It is only when you allow yourself to be, “the center of your own historical interpretation,” that you fight against invisibility. Through rejecting otherness, the need for categories and labeling become benign.

As King continues to facilitate topics of dialogue, he refocuses the discussion on the idea of home. He asks, “When and why does and adopted country become home?” I had never considered such a question before. Honestly, when I think of my connection to American soil, it is only right for me to acknowledge how I—and many others who look like me—arrived here. When one is unable to choose their place of origin or belonging willfully, should their placement still be considered an adoption? Like many other African Americans, it is hard to formulate a genuine emotional connection to this place we call “home,” especially when reflecting on what home could have been. However, Both Lee and Nguyen offer valid points, on how the adoption process might look for those who find themselves having to relocate.

A new country might become one’s home when they are offered safety. Most who flee from their countries—due to war, famine, etc.—are offered a sense of security that they lacked before resettling. It is the concept of new life and the guarantee of protection that makes the uprooting worth it. Lee also explains that “equitable application of the law” also plays a large role in adopting a new country as your own. Ultimately it is the comfort found in the idea of rebuilding what once was lost that allows for hope and a new beginning. However, new beginnings are hardly ever possible if we are unable to authentically address the past.

This past year was nothing short of an apocalyptic scene from some zombie infested movie. But in many ways, what most of us witnessed was only the raring head of a 245 plus year-old monster. it was America at its finest—caught in 4k. As we all were made to slow down due to the effects of the COVID-19 virus, we were also witnessing the consequences of crises gone unsolved. As the effects of racism took to the stage front and center; America was left to reckon with the results of ongoing police brutality, anti-Blackness, and anti-Asian hate. In these instances, author Viet Nguyen says that he saw, “history compressed.” It does not take much to place ourselves back into last year’s events. However, much of America has become concentrated with an optimistic gaze on our foreseeable future.

As King’s facilitation ended, he asked each author to give a response on whether they possessed optimism about America’s future. Both authors agreed that true optimism and change would start with an “American awakening to racism.” It is only through true recognition of this country’s foundations that we can look confidently into the future. As young people throughout the country become more passionate about truth and justice, we grow closer to being a land of the free and a country for all.