Peace in Times of War

“A good story is literal in the same sense that a child’s drawing is literal.” – Flannery O’ Conner 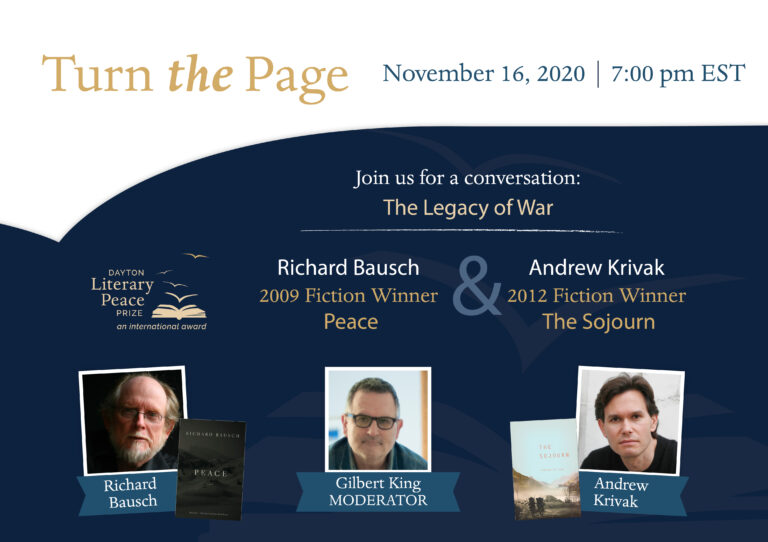 Richard Bausch and Andrew Krivak sit down with Gilbert King to explain the intricate process of creating stories that allow people to feel. With their focus on war and its invasion in times of peace; both authors reflect on their previous novels, bringing greater context to this subject. Bausch largely reflects on the harshness of war on society, while Krivak explains the importance of literary embodiment. Both authors glean from personal experience to converse about the importance of truth, failure, the imagination, and the visibility that comes from the telling of stories.

The concept of storytelling can be understood from a very young age. Often taking place in family settings, these stories allow us to entertain the imagination. Both Bausch and Krivak speak about the importance of family and the historical meaning these stories evoke within them. Both authors admit that much of the inspiration for their own work has come from the stories they heard as young boys. As it turns out, both of their fathers were involved in combat, meaning that tales of war were often told throughout their lifetimes. However, these stories were not constrained or attached to old memories; both Krivak and Bausch say that the imagination must be used to bring these stories to completion.

As the authors continue their conversation with King, he asks them to expound on the idea of imagination and how it aides in the telling of stories regarding combat:

Bausch discusses the history of witnessing war through film. Although relatively new, when reflecting on the history of film and videography it is through witnessing such events, that the imagination is stimulated. Ultimately, this stimulations permits the mind to visualize new things. Bausch describes this expansion and growth as, “having an imagination that is willing to make things up.” He explains to the audience a theory which he calls “the surround.” He states, “If you can get to the truth of the matter…and learn enough about the surround –‘what it was around it all’— you can arrive at a truth that anyone who comes upon it will see it as so too.” He explains that your stories become ‘the truth’ when you are able to catch the reader’s eye; making them believe what you have told them and helping them to visualize it as well.

Bausch’s words stuck with me, as a writer we are sometimes encouraged to adopt a single perspective and to write within it from that point on. Instead, Bausch encourages his audience to see their pieces as true. He implores the audience to “write with [their experiences], instead of writing about them.”

As Krivak follows up on this question he mentions the importance of the ‘cinematic generation.’ It is the visualization of war and danger that gives the imagination context and meaning; it places these stories into other universes ultimately producing deeper significance. However, Krivak also believes that there is an added component, which heavily relies on reading and understanding the work of others. It is simply impossible to tap into other worlds and universes if you are unable to read the work of those who have visited such places.

Both authors reflect on their own process of storytelling, and how it has led to some of their greatest accomplishments:

Bausch describes humanity as “Homo Fabulus,” a story making species. He gives a quote from another author, stating that, “a story only needs a good storyteller.” Krivak explains that “everyone has a subject, [one must only ask] what is the story?” Bausch explains that writing the story is only half of the battle, but it is the willingness to fail that completes it. However, the most desired outcome in producing these stories is that the reader is able to see others through the author’s lens. It is the job of literature to save us, mostly because it has the power to help us see others for who they really are. In a polarized world so easily divided by subtle differences, literature reminds of our common humanity. Bausch believes that, “literature brings forth the common grave human heart.”