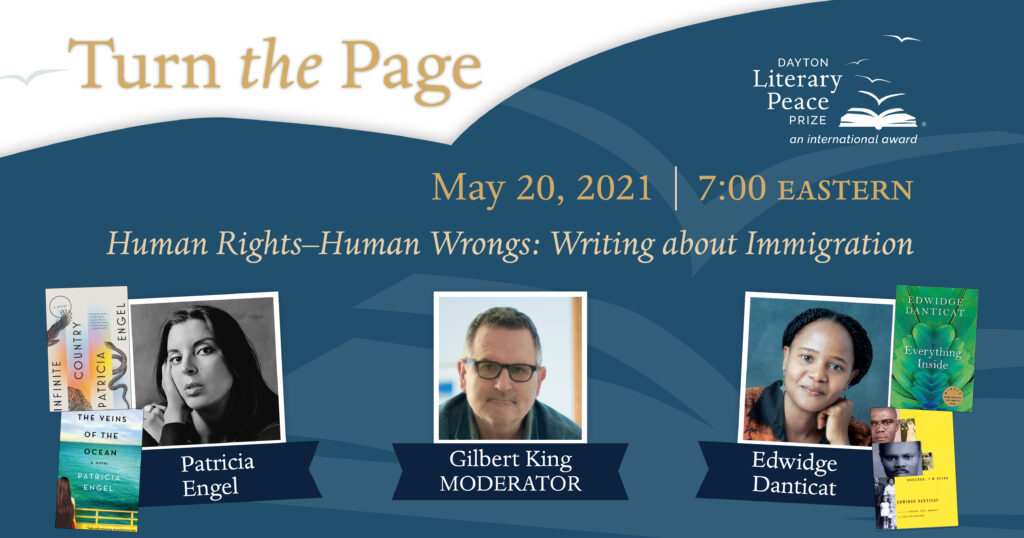 In this virtual gathering of writers, Gilbert King, author of Devil in the Grove and 2013 Dayton Literary Peace Prize winner sits down with authors Edwidge Danticat and Patricia Engel to explore a broader perspective on the numerous journeys of Immigrants through the stories of first generation characters and their experiences.

Edwidge Danticat, 2008 Nonfiction Winner of the Dayton Literary Peace Prize and Haitian Immigrant speaks on the confusion surrounding immigration policies within the U.S. She states, “Poor Haitian immigrants are pretty much treated the same regardless of the administration in office.” The confusion and frustration spoken of can be most recognized during the 1980s HIV/AIDS crisis that created misinformation about Haitian Immigrants and the perceived threat they posed to the American people. Danticat explains that many of her stories focused on immigration are given their substance through reflection on her own personal experiences. She states, “All of these characters share bits and pieces of real life stories.”

Patricia Engel, 2017 Fiction Winner of the Dayton Literary Peace Prize and First generation daughter of Columbian Immigrants expounds on such frustrations when adjusting to American culture and citizenship. Engel explains that the process of immigration must be understood apart from traditional U.S. binaries. When learning about immigration, it must be considered that there are many possibilities that can result in unstable statuses heavily reliant upon government administration. Engel believes her novel Infinite Country best represents these issues.

As both authors continue to reflect on their own upbringings, Moderator Gilbert King asks them to share how Native religions find homes within their novels and inform readers and the world that surrounds them.

Danticat speaks about the traditional practices of Voodoo and the many deities that are worshiped within this religion. Acknowledging the history of syncretism and Catholic influences introduced through colonization; she also realizes the suppression of native religious practices. However, within her novels characters are described as practicing many religions within the same family. Danticat explains that even as a young child traditional religious knowledge is imparted to the younger generations at an early age. This imparting of knowledge becomes a guide to those who are made to partake in the process of immigration. However, throughout this process such knowledge is often lost, forgotten, or cut off from generations born outside of their homelands. Danticat says that this knowledge is to be treasured and serves as an anchor in times of instability. Having the ability to reach back for stories becomes the saving grace of the immigrant.

Engel agrees with Danticat, she explains that these stories are sometimes the only things that families are able to take with them. Reflecting on her own Columbian background, she references Santeria and the various forms of syncretism that can be found in that native religion. Engel explains the importance of understanding how native practices are largely connected to the lands of the people. Such examples can be found in mythology, Folklore, and even Ancestral History because in one way or another these beliefs are interconnected, often sprouting from the same root.

In the greater understanding of land and heritage, both authors also agree with the importance of educating the descendants of immigrants on the realities of their countries. Edwidge Danticat shares stories about her daughters and the familiarity they have cultivated with Haiti. She acknowledges the duality between “love for country” and blatant honesty about its flaws. That is one of the only ways to develop a true connection with your homeland, especially once removed from a physical location.

As Gilbert King poses the next question, he focuses on the concept of prisons and how they become entrapments to those who seek asylum.

Patricia Engel speaks on the dichotomy placed between American-born children of immigrants. She explains that status often differentiates the experiences available to the individual. It is the criminalization of immigration that makes the concept of prisons more real and dangerous. The human instinct of survival is common to all of the human family; the difference becomes categorized by how safety is obtained. Engel explains that our perceptions also aid in the creation of confinements. She states, “Stereotypes handicap our own thinking and conscious.”

Danticat states, “Prison is a very real thing for undocumented immigrants.” She says, “Detention is the first thing that many immigrants encounter upon coming to the U.S.” However, this fact is not always known or understood by outsiders. Immigrants are greeted with detainment. With this new arrival to unfamiliar lands there is also the possibility of betrayal—vulnerability runs rampant amongst immigrant communities due to a hopefulness and trust unaccompanied by knowledge.

King then questions about terms such as, “The Immigrant Experience,” and whether it encompasses all that immigrant communities encounter.”

Engel believes the term to be reductive due to the fact that many immigrants face exile and are forced to exist in a new life. Engel explains that as a daughter of immigrants, your life is often equivocated to a crossing over from one life to another. To simply label these stories as, “The Immigrant Experience,” creates limitations around what these individuals endure. These experiences cannot be labeled or categorized singularly because all if these journeys are defined by movement. Danticat mentions that immigrants are also not to be viewed as “exceptional victims.” She believes that they all should be celebrated for making it. She explains that the world often applauded those who are said to have “made a difference,” but jaded applause only serves to reject those who derive from other backgrounds that are not as glamourous. She states, “The singularity of every life is very different, there is no broad immigrant experience.”

This too must be acknowledged when developing the concept of “immigrant fiction.” Engel believes it to be ironic due to the fact that most of the American population is a product of immigration—even if not recorded in recent family history. To purposely other another group of people is to forget the origin of our own history as American people.

The idea of storytelling, especially when documenting the lives of immigrants and or diasporic peoples must be viewed as a tool. Danticat explains that storytelling served to inform much of her adult life. However, these were more easily remembered upon reaching a point within her life where she needed them. In this way, storytelling acted as a means of survival through unexpected hardships and trials. As the panel ended, both authors agreed on the importance of telling stories from multiple perspectives. It is the only way to understand a country or location in its fullness. When unable to do so, the scales are often left unbalanced, leaving the audience with a skewed and often uninformed perspective. To see Haiti and Columbia in all its beauty requires stories of both grief and joy, heartache and celebration, life, and death. Without them, we are left with the make believe.